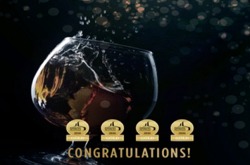 KWV won the prestigious title of World’s Best Brandy/Cognac Producer for the second year and World’s Best Brandy for its KWV15, beating Cognacs and brandies from 70 countries at the 2016 International Spirit Challenge (ISC) awards function in London last night.

KWV is the only producer to ever win the coveted Best Producer title twice and with its additional four ISC Gold medal wins, makes KWV the best performing brandy producer overall at this year’s competition.

The ISC is recognised as the most influential spirits competition in the world and involves days of intense blind tastings by a panel of more than 50 respected industry professionals.

On receiving these accolades, KWV Master Distiller Pieter de Bod, says that winning an ISC medal is an outstanding achievement and underlines KWV’s commitment to quality and innovation.

He adds: "This reaffirms that KWV produces consistently the best brandies in the world and to win this for a second time, beating the best Cognac producers, is a huge accolade not only for KWV, but also shows that South African potstill brandies are as good and even better than Cognac."

"KWV is the only producer, not only in South Africa, but worldwide that won not only one gold but 4 gold medals in the competition and to win it in the premium potstill category of the competition makes it more special," says de Bod. "Only one other gold was awarded to a South African producer but that was in the blended brandy category. To receive 4 gold medals and the Trophy for the Best Brandy in the World at the ISC, the most respected spirit competition in the world is a huge honour and privilege."

He continues: "KWV has now, in the last 5 years, won "Best Brandy in the world" trophies for all our KWV potstill brandies, the 10, 12, 15, and 20 years old that shows that not only one brandy stands out as world class but all our brandies are consistently world class. This is a feat no other brandy producer has achieved ever."

De Bruyn Steenkamp, Global Sales & Marketing Director for KWV says that KWV premium brandies are performing well despite the brandy category being in decline. "In fact KWV10 grew sales volumes by 7% and revenue by 18% off a focused premiumisation and brand building strategy in line with KWV’s core values of quality and heritage," he adds.