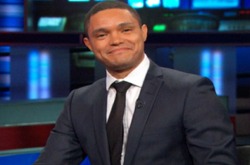 The debut of Trevor Noah on “The Daily Show” as a new host last week was a big ratings success on the Viacom and Comedy Central networks. Comedy Central had 1.09 million viewers watching him taking the helm of the show, while 3.4 million tuned into Viacom’s network. It’s a dawn of new era for this great news parody show and people already like him as the new host.

It surely is a breath of fresh air after 16 years of watching Jon Stewart as the host. Trevor Noah has been welcomed well by the viewers describing him as a more refined version of his predecessor with a chummy attitude, and a lot of single jokes sarcasm. He is after all young and less skeptical than Stewart whose skepticism grew as he got older. Noah’s breath of fresh air is propelled by his youth as well as new ideas that will be used to make changes to the format.

He is also very accessible person because he is all over the social media. This makes him more reachable than any other TV personality before. There’s a pretty good chance that if you tweet him that he will tweet back. He is so accessible that you can even tweet him to send you a catalog of South African online casinos and he will most certainly do that. It’s really refreshing to have a celebrity that you can easily reach to.

One of the best things about Noah’s takeover is that he is able to bring diversity to the show. You surely must have noticed something different about him compared to Stewart or other show hosts. His South African descent makes him a lot different than all the white hosts. It won’t be the same brand show, only brand new host. It will be The Daily Show with something a little different than just a Stewart replacement, something that will be left as a long legacy, hopefully.

However, Noah will be looking to continue the legacy that Stewart left too and pay a tribute to him by continuing his beloved show the best he can. He refers to him as “a dad”, and refers to himself as “a stepdad”, so the family is now even more interesting because the new dad is black.

Noah is certainly not a rookie in hosting a show. South Africa remembers his “Tonight with Trevor Noah” show, where he displayed his personal charm, and showed that it’s hard to not like him even when his jokes are not that funny. The legacy has begun.