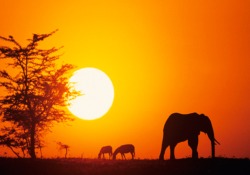 South Africa had anchored its foreign policies to benefit the country's economic growth, Cwele said at a cluster briefing on International Co-operation, Trade and Security (ICTS).

The briefing was part of a series of briefings planned by the government to support the messages delivered by President Jacob Zuma during his State of the Nation address (Sona) in Cape Town on Thursday night.

He said South Africa and Botswana would identify projects that would encourage the development of cross-border value chains in key sectors including transport, mining, agro-business, tourism, agriculture, leather and the processing of natural resources, among others.

Cwele said South Africa remained committed to contributing towards building a better Africa and supported regional integration as well as peace and security on the continent.

The African Capacity for Immediate Response to Crises (ACIRC), of which South Africa is a contributing and founding member, was now operational, the minister said. South Africa's National Defence Force and Police Service continued to participate diligently in conflict prevention and peacekeeping in the continent, he said.

Economic co-operation with South Africa's Brics partners was strengthened when the first of two intergovernmental agreements were concluded at the sixth Brics summit.

Other global regions such as Europe remained important strategic partners for South Africa through which the country was able to advance its national and foreign policies, Cwele said.
"We have a valuable partnership with the European Union in, among others, the Infrastructure Investment Programme for South Africa valued at approximately R1.5- billion," he said.
The minister said the renewal of the African Growth and Opportunity Act (Agoa) beyond September 2015 and a pledge to support African-led peace initiatives in the continent were among the significant outcomes of the US-Africa Leadership Summit held in America last year.
South Africa was committed towards "playing its part in creating a better South Africa by contributing to a better and safer Africa in a better world", Cwele said.

Other issues discussed by Cwele at the briefing included:

Market integration: South Africa continued to broaden market integration through the Tripartite Free Trade Area (TFTA) negotiations with 26 countries of East and Southern Africa. The TFTA is expected to create a market of 625-million people and a GDP of $1.2-trillion.

Tourism: South Africa has received more than 3.8-million foreign visitors, generating a R20.3-billion contribution to the economy. Tourism represents 3% of South Africa's GDP and supports more than 617 000 jobs. "Including indirect impacts, tourism generated 9.7% of the GDP and supported over 1.4- million jobs last year," the minister said.